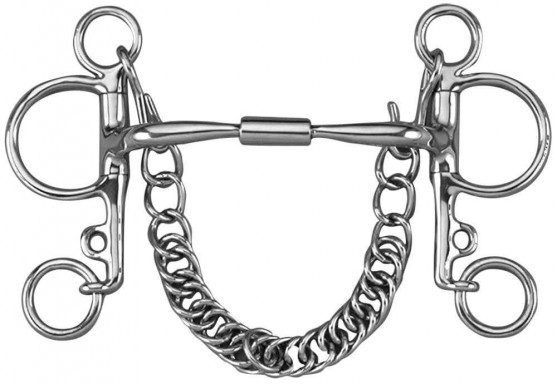 The MB 02 is the Myler alternative to the traditional French link or lozenge mouthpiece commonly used in snaffle bits. The MB 02 rotates onto the tongue, applying tongue pressure, but because the mouthpiece is curved, it wraps around the bars and lips instead of pinching. The barrel in the center applies approximately the same pressure on the tongue as a traditional three-piece mouthpiece, however, the barrel distributes the pressure more kindly and creates Independent Side Movement™.

Notes: The mouthpiece is similar to the MB 02 but the center barrel of the MB 01 is narrower, which concentrates pressure on the center of the tongue more than the MB 02. For more tongue relief, step up to the MB 04.

The stainless steel Pelham is designed to be used with two pairs of reins simultaneously. The headstall attaches to the purchase ring which keeps the cheek stationary. The first set of reins are the snaffle reins, which attach to the larger ring adjacent to the mouthpiece. The second set of reins are the curb reins, which attach to the smaller ring at the bottom of the shank. Comes with curb chain.

The Pelham uses both direct (snaffle) and indirect (curb) rein action using two sets of reins acting on one mouthpiece. Similar to a double bridle, which also uses two sets of reins, but the double bridle requires a snaffle bit for the snaffle rein and a curb bit for the curb rein. The Pelham can be used with a bit converter, a leather loop connecting the snaffle and curb ring to which only one set of reins is attached.

Keep up to date with eNews
News, Promotions and more